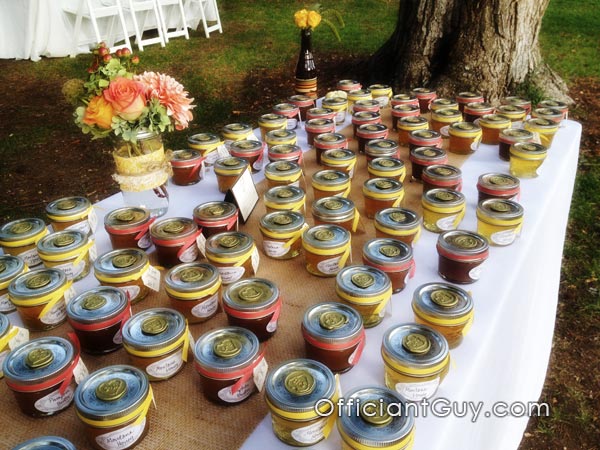 If you are getting married, I’m sure that you are looking for ideas for wedding favors. Many wedding couple’s give their guests a gift or a memento of their wedding.  Some are very hip and useful.  Some are kitschy and cheesy.  Some are just plain weird.  I’ve seen a fascinating variety of wedding souvenirs.  I never considered how many ways there are to put two names or sets of initials on a generic item.

One of the softest towels in my house was part of a beach bag of gifts given to the guests of a wedding on Santa Monica Beach.  Sure, it says the bride’s and groom’s names on it but it feels so good. In the back of a cupboard I still have an energy drink in a can that celebrates a wedding where I was the wedding officiant at the Playboy Mansion with the Playboy logo.

Many couples give candy to guests, mixed bags of jelly beans, large candy canes, personalized boxes of chocolates, to name a few. A few receptions had candy buffets and every guest could fill a bag with any candy they wanted.   The bags typically have the wedding couple’s names and wedding date.  Some people make a bee-line to the candy buffet while others rush to the get a drink at the bar.  If you will be giving candy to your wedding guests I suggest that you do not get too creative.  Somewhere in a cupboard I have white chocolate “sculpture” that looks way to much like a the result of a bodily function. I had to save it because it makes me chuckle.

Some wedding favors are very unique.  One couple gave their guests a T-Shirt that said “Him” or “Her” on the chest.  I was impressed that they did not make them only in blue and pink.  I officiated a couple’s wedding on stage at the House of Blues in Hollywood during a battle of the bands in which the groom’s band was playing and which Sammy Hagar hosted.  The wedding couple gave guitar picks with a retro image of the bride and groom on it.  When I finally start my online guitar course I’ll be using that pick.

Another couple gave everyone a framed photograph in a stand.  The images were only a couple inches high but there was one at every seat at the reception next to the water glass.   It created an very unusual vibe.  I’d like to think the couple was playing a joke but I don’t think they were.

One of the nicest wedding gifts I’ve received is a CD with songs chosen by the bride and groom that were their favorites.  Wedding CD’s  are the grown up version of  what used to be called “mix-tapes” when I was growing up.  However, I’ve received many wedding CD’s and not all of them have been memorable.   I will discuss “Wedding CD’s” in more detail at another time but I advise any couple to make your songs about your favorites, but don’t go overboard trying to make it romantic.  There is a very thin line between romance and between forced romance and tackiness.  If I never hear “The Wind Beneath My Wings” ever again that will be fine with me. Think about being unique and personal.

Being a Los Angeles wedding officiant with thousands of weddings under my belt I have  solid advice for you: if you are planning to give wedding favors to your wedding guests I suggest that you use come creativity and have some fun with it.  And if you will be giving a gift with a picture of you and your fiance on it make it is a good picture.  I have a water bottle with a couple’s image on it that is so bad it looks like they chose the worst picture they could find.  Perhaps they should have opted for a candy buffet.