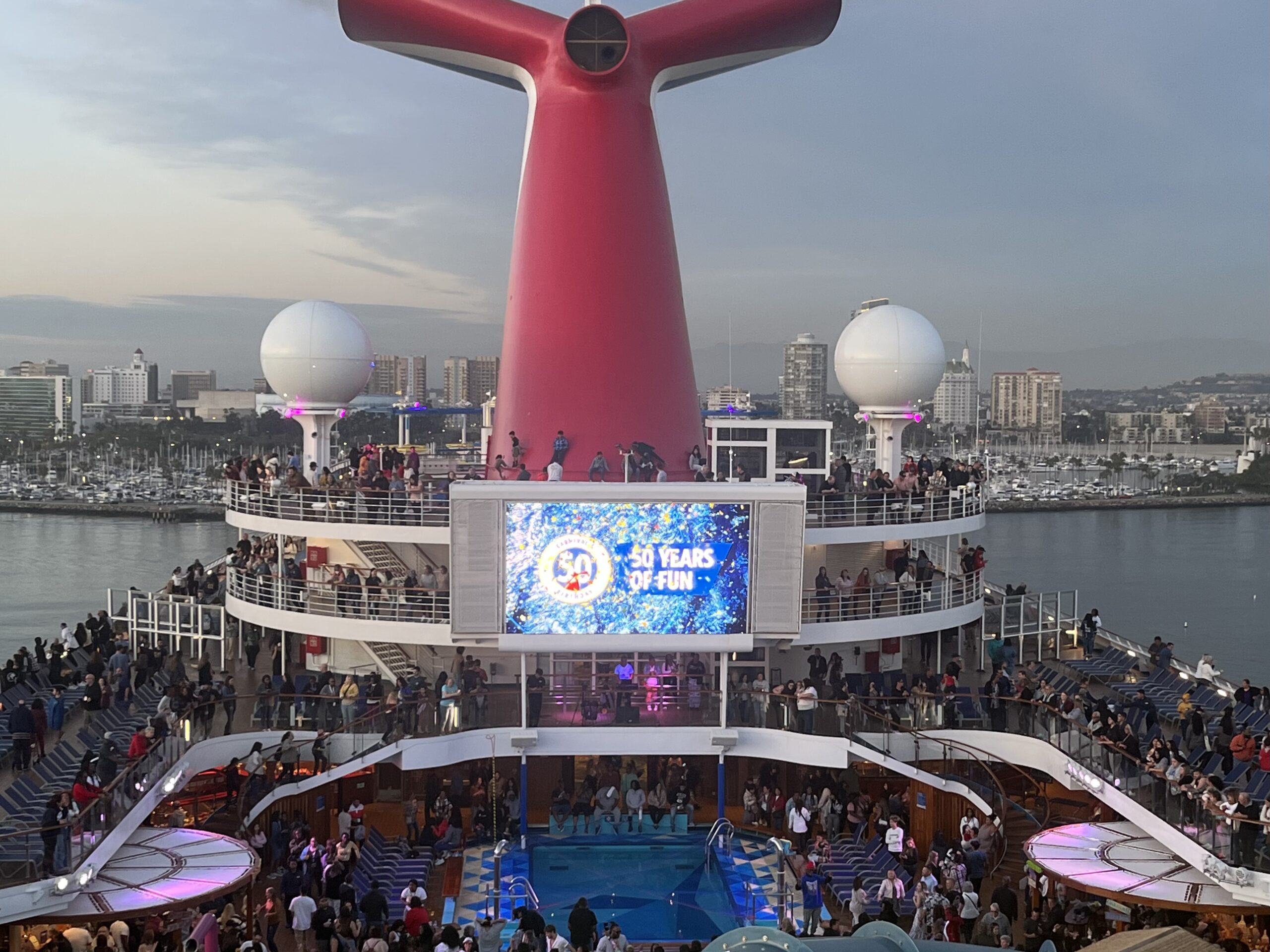 Last Friday I officiated a ceremony on a massive Carnival cruise ship (you can read more about weddings on Carnival cruises here) before it departed from the Long Beach terminal for a weekend cruise to Ensenada.

Even though the wedding ceremony took place before the cruise, the wedding couple generously offered to pay for my cabin. I had never been on a cruise before so accepted their offer. I had only a vague idea what the experience would entail.

The gentleman who cuts my hair is a frequent patron of the cruise industry. When I told him I would be taking a three-night trip to Mexico he laughed and said “Ooooh! The booze cruise!” Truer words were never spoken. I already assumed that food and alcohol were important elements of the cruise experience. Based on my experience, it may be more accurate to say that food and a boat trip are important elements of the drinking experience.

I don’t mean to suggest that the cruise wasn’t fun. My mini-vacation on the sea was a blast to the extent that I can remember it. The ocean liner, called the Radiance, was celebrating her fiftieth year afloat, not that her passengers needed a reason to celebrate. Boarding of the ship began at 9:30am for a 5pm cruise but the bars were open as soon as anyone was willing to order a drink.

Well before we set sail the ship was already a raging party. A neophyte to the culture, some people called me a “cruise virgin”. As such, I was not aware that to score a spot in the upper deck hot tub I would have had to claim my spot by about noon. Many guests sat on immovable barstools from early afternoon until the bars closed at midnight or 2am depending upon which bar was chosen.

While we were still docked, sales tax was added to the drink price whether you were paying as you drank or, much more commonly, you bought the “Cheers” drink package which afforded you up to fifteen drinks per day for about $70 ($57 plus built-in gratuity).  Cash was not used.  Instead, the plastic key card to your room doubled as your drink and food card.  Despite the prepaid gratuity for the wait staff it was customary, but not required, to add a dollar when you signed your tab.  All additional gratuities and sales tax were charged in the aggregate to my debit card after the cruise ended.

My room/drink card was blue to signify my cruise-virgin status. Most passengers had been on multiple cruises and had a red card.  No matter the color, some fellow travelers made it their mission to consume all fifteen of their permitted drinks. To ensure that nobody got too inebriated, a least five minutes had to pass between one’s drink orders. Given that restriction, it would take someone just 75 minutes use up their drink rations for the day.

The ship was like a floating city with a population of about three thousand guests and more bars per capita than Bourbon Street. Among the numerous restaurants and buffets were many with nautical names like Cucina del Capitano, which should not to be confused with Pizzeria del Capitano. The menu at the main dining hall had two “new” items that were offered in honor of the Radiance’s half century of service: Mushroom soup and spaghetti carbonara. I am not sure how those dishes related to her birthday but I enjoyed both offerings.

Of course, I was not limited to just two items. Unless you eat at one of the “prime” restaurants, at which only a portion of your meal is subsidized by the basic mail plan, you can eat as much or as many entrees as you can swallow.  At the main dining hall you also were treated to a “floor show”  at some point when the wait staff broke into a song and did a hokey-pokey type of dance.

Despite the huge number of fellow travelers, I saw many people over and over. Perhaps it was because we gravitated to the same bars or cafes.  The lobby bar on Deck 5 in the middle of the ship was where I tended to see the bride and groom and the groom’s siblings. All are very nice people and most were visiting from Utah and Nevada but, alas, one family member could not board the Radiance because she left her wallet and I.D. in a restaurant on her way to Long Beach. A lot of eye rolling by the siblings who made it onto the ship led me to believe that the missing family member started her drinking well before the wedding. Their very elderly parents also joined the cruise but spent most of their time in their cabin watching the array of available movie channels.

A spa, a weightroom and a sauna were available until the evening but I did not meet anyone who had used them. The evening entertainment options were much more popular. At the karaoke bar I saw some surprisingly good singers including a guy wearing a Mexican poncho who performed a wonderful version of “Hallelujah.” A DJ at the lobby bar offered 50’s, 60’s and 80’s themed musical shows with a couple who of lip-synched the songs on stage. The comedy club and bar had an early PG-rated show and a later R-rated show both performed by the same comedian. The disco was popular among the younger crowd.

One of the first things I noticed on the main deck was the huge waterslide which highlighted the water park. Alas, it rained much of the second day so only diehards took advantage of the slide.

Late on the first night I encountered a man who was falling down drunk next to the gate to the waterpark. At midnight it would be his 25th birthday and he had proudly consumed his allotted fifteen drinks in anticipation of riding the slide as the clock struck twelve.  Alas, the waterslide closed hours earlier and he was beside himself with frustration. So drunk that it was hard to tell if he was crying, he kept yelling “Just once! Just once!”

The second day was a bit tamer than the first. I think a lot of people were recovering from their wild night before. During the day many of guests dressed in their teams’ colors sat in bars and watched NFL playoff games. That evening was “dress up night” but, other than the fact that a lot of women wore low cut and very bright colored dresses it was no different than the night before.  The casino was very busy that night and, of course, so were the bars but in a more sedate way than the prior night.

On the last full day of the cruise we docked in Ensenada for about seven hours.  It took about twenty minutes for the shuttle to take us into town.  I went on an excursion to La Bufadora (The Blow Hole) mostly because my family had gone there several times when I was a kid.

The road is much safer and the shopping area near La Bufadora is much more upscale than when I was younger and most of the vendors simply sold churros. I had some very good food during my visit.  However, the blow hole is still just a spot where water shoots into the air when a wave reaches the end of the cove.

We had to be back to the Radiance by 4:30pm because the 5pm departure time is set in stone.  I asked a porter if any ever misses the boat and he told me that it is a rare cruise when nobody does.  That is not surprising when you consider that most of the passengers who visited Ensenada spent their time at Papa’s and Beer or at Hussong’s Cantina drinking. The shuttle driver said that there is always someone who gets sick during the ride back to the ship because they drank too many tequila shots in the city.

I was impressed by the crew and the waitstaff and bar staff. Few if any were Americans and all wore name tags with names that hinted where they were from. They all seemed eerily happy but their good moods did not seem disingenuous. I imagine that either they are very well paid or the personnel administrators run an unforgiving ship.

The stateroom attendant who took care of my cabin was friendly and happily introduced himself every time I saw him. Each evening when I returned to my cabin, I found on my bed an animal made of folded and rolled towels and with black felt eyes.  An elephant greeted me the first evening and rabbits the second and third.  I am not good at towel origami so when I left I just rolled up a towel to make a snake with black eyes and left a cash tip in the snake’s mouth.

All in all, I had a good time on the Radiance Booze Cruise. Cruise ship weddings, more so than other  typed of weddings, are amplified by the experience. Three days at a moderate level of inebriation and all the food I could eat was not good for my physique but I didn’t spend much time worrying about any work or tasks. I am not sure I will do it again but it is one more thing to check of my bucket list.

Well. Since you made it to the end, I guess you might be interested in getting married on a cruise too. As an Southern California wedding who is now experienced in cruise ship weddings, I’d be delighted to be a part of your marriage ceremony. Luckily you don’t have to pay for me to go on the cruise – as long as it’s still in port when I can get off and wish you a bon voyage after the ceremony is over.

If you were here just to read my (hopefully) entertaining experience but are also getting married in Southern California, I can help with that even if cruise ship weddings aren’t what you have in mind. I can issue your California confidential marriage license and perform your wedding ceremony anywhere you want. Give me a call at 562-547-3255 or send me an inquiry to look into cruise ship weddings or other destination weddings today.