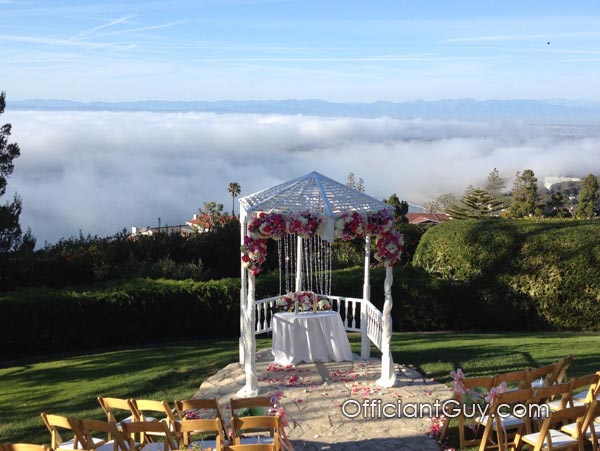 As we wedding officiants have found, anything can happen at a wedding.  Sometimes it is funny, sometimes it is frustrating but it is almost always unpredictable and memorable.  Whether it is a couple who decides to consummate their marriage vows before I depart their private elopement ceremony or a bride’s sister who gives a peep show to me throughout the wedding ceremony, anything goes.  As a busy wedding officiant, I am proud to say that it is the very rare occasion that a hitch in the many marriage ceremonies I have the honor to officiate is caused by me.

One of those few glitches happened during a marriage ceremony that I officiated at a beautiful setting overlooking the ocean.  The bride and groom’s wedding site was also a favored spot for a large swarm of flies.  Everything went well for most of ceremony until I suddenly felt a foreign object in my mouth.  That foreign object was a fly that was vibrating violently and quickly became lodged toward the back of my throat.  I tried to “casually” cough it out but to no avail.  My throat naturally constricted and for a few passages I am sure I sounded like an emphysema patient.  But I carried on.

After a short time the critter stopped moving but I could still feel it on the back of my tongue.  I think I attempted to force the fly out but my body did not receive the proper message and inadvertently swallowed instead of coughing. Somewhere there are a number of wedding photographs with the officiant looking like he is about to vomit.  Fortunately, my gag reflex is stronger than my cough reflex and I did nothing to make the couple’s wedding ceremony tragically memorable.  Wedding officiants should be noticed but not too much.