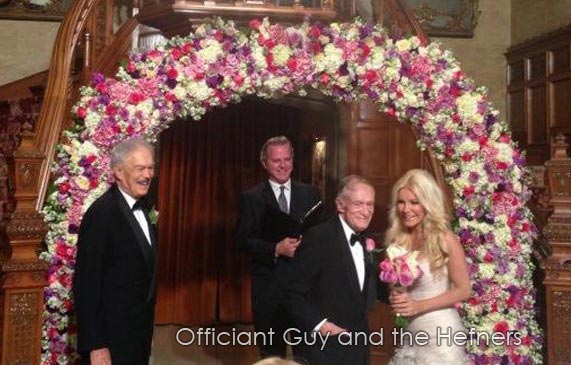 On New Years Eve I had honor to be the wedding officiant for Hugh Hefner and his beautiful bride, Crystal Harris, at the Playboy Mansion in Los Angeles.   What a blast that was.

Crystal was beautiful in her light pink wedding dress and Hef, uncharacteristically, wore a tuxedo instead of his silk pajamas.  It was nice to see Hef’s brother, Keith, and his lovely wife, Caya, as it was just a few months ago that I was their wedding officiant on the lawn of the Playboy Mansion.  Keith was Hef’s best man and Mary O’Connor, Hef’s assistant for over four decades was the maid of honor.  The marriage ceremony was fairly small and was attended largely by Hef’s and Crystal’s family members and a few close friends.  Champagne and caviar were served at the wedding reception as I chatted with Keith and Caya.

Hef’s and Crystal’s wedding was the third wedding ceremony that I have officiated at the Playboy Mansion.  I was also the wedding officiant for Kendra Wilkinson and Hank Baskett a few years ago in a ceremony that was televised for their television show, “Kendra”.

Of course, I brought my wife, Linnea, and we were invited to stay for the Playboy Mansion New Years Eve Party.  The party was quite a classy event!  No sooner did Linnea and I have a seat on our own white vinyl couch did a waitress bring us a platter of crab legs, oysters and shrimp and a bottle of Grey Goose Vodka.  We also enjoyed the extensive buffet and the open bar and mingling with guests which included all walks of life.  I was more entertained than my wife by the several Playboy bunnies who were wearing nothing but painted-on tuxedos.  Naturally, I had my picture taken with a couple of them.

Perhaps the funnest part of the party was the people watching at the party which had a “Black Tie and Lingerie” theme.  Countless bunnies, models and celebrities were there.  One of the prettiest women was the 71-year-old Britt Eklund who is still stunning.  I even ran into Gene Simmons and Shannon Tweed who were recently married after I issued their marriage license.  While many party goers were standing in line to get their picture taken with them I said “Hi” and Shannon yelled “Chris!!” and gave me a high five.  Gene was a bit more subdued and simply smiled and gave me a fist bump.

Live music was performed throughout the evening by the wonderful Brenna Whitaker and her Little Big Band but Gene and Shannon’s daughter, Sophie, sang a beautiful version of “At Last”.

As the clock struck midnight we all shared a champagne toast to ring in the new year.  I hope 2013 remains as fun as it began for me and my wife and for all of you who may be reading this.  Happy New Year!