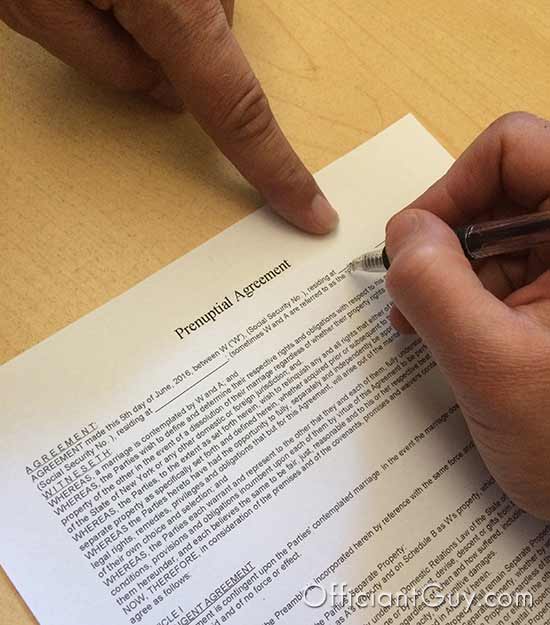 As an officiant, I am often asked about prenuptial agreements, whether they are a good idea or if I can create one for my clients.

As an attorney, I can tell you that any contract is a good idea since it’s laying out the rules in advance of any possible future disagreement.

However, I am also an LDA (Legal Document Assistant) and acting in that capacity, I must be impartial to both parties. Legal Document Assistants are those legally-trained, registered and bonded document preparers who can, at your behest, assemble most legal documents, in an affordable way. It is always good practice to show your attorney what an LDA prepares for you.

Prenuptial agreements, or Prenups, as many people refer to them, are contracts signed by a couple prior to their wedding ceremony. It spells out, in detail, how assets would be divided in the event of a separation, divorce or death. In a way, it’s a way for a couple to be level-headed and fair to each other prior to any disagreements. It settles the argument of what someone deserves when they are left behind instead of leaving it to the courts to decide. Prenuptial agreements are becoming more common as more people wait to be married and have assets that they personally built combined with the reality that half of all marriages end in divorce. A prenuptial agreement is a good idea.

It’s a good idea to complete a prenuptial agreement at least two weeks ahead of your wedding ceremony so that both parties do not feel, or can claim, that they were pressured into signing one. As with all legal things, it’s a good idea to sleep on something before you complete the transaction. Keep in mind that it’s advisable to also have at least a couple of witnesses from each person’s “side” who can attest that there was no pressure.

A prenuptial agreement is often an awkward thing to bring up to your fiancé, however, if you feel uncomfortable speaking openly about one, maybe that should be the first test of openness and honesty between you and your betrothed. Honesty and openness in a marriage will ultimately always make it stronger. I know from what I speak as I have been married since 1992.

Click on Legal Document  Assistants to see what kinds of legal documents I can prepare for you.

In the event, the two of you would want to have a marriage ceremony anyplace in California, get in contact with the best marriage officiant. If both of you desire a carefree LA wedding ceremony, he will help! It can also be in a periphery of 100 miles from Los Angeles.

Officiant Guy has been a ceremony officiant for over 20 years. He has made it easier for engaged couples from all around the world get married in Southern California and has received the trust of countless couples because he happens to be a specialized notary, combined with being an ordained minister, and a CA lawyer.