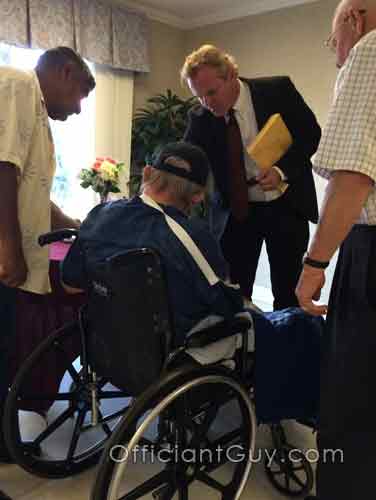 It happened again. I was astounded, but it does happen frequently to me as a wedding officiant.

I was contacted by a couple this week who had been living together for decades. They lived many years together and then suddenly, there was a cancer diagnosis, and I was called when the bride was in the hospital awaiting procedures. I suggested that I come over right away and make sure that the couple would be married promptly. “No,” the groom said, “We have some things to arrange and a few people who we would like to be there.” I tried to persuade him to take care of it now, but he assured me that we could do it in two days and so, we scheduled it, against my advice.

Normally, I prepare the marriage license the night before and then show up with just five minutes of signatures and information to go over. But, I’ve learned over the years to wait until last minute with hospital weddings. I waited until morning.

And then the call came. She had passed. All plans were off. End of story. I felt so bad for this man who now was grieving but also had to deal with the legalities of being only a roommate and not a legally married spouse.

Just like in the movie “Ghost” in which the vibrant young man was murdered and his life was taken from him in an instant, something he never expected, death can come as an unwelcome adversary in an instant.

Way, way too many couples seem to have magical thinking that if they just wait, maybe things will turn around, or maybe they will prolong their love’s life. I’m here to tell you that you have to act quickly.

Life is too short so get married now. If you’ve found your love and they are ill I can be an immediate wedding officiant for hospital weddings. Sometimes I’m just 15 minutes away. Why wait? Do it now. And do it correctly.

Chris is a Los Angeles based officiant for weddings. He has been performing hospital bedside weddings and providing LA County marriage licenses (which are legal all throughout California) for decades for couples in need at hospitals, hospices and nursing homes. Officiant Guy would be able to certainly be your wedding minister for any sort of marriage service from a non secular wedding to a nonreligious wedding.

When you’d want to experience a wedding anywhere you want from Santa Ynez to San Diego, consult with the top marriage officiant. Respectful, highly-experienced, intelligent and poised, give him a call at (310) 882-5039 or (562) 547-3255 or email here.